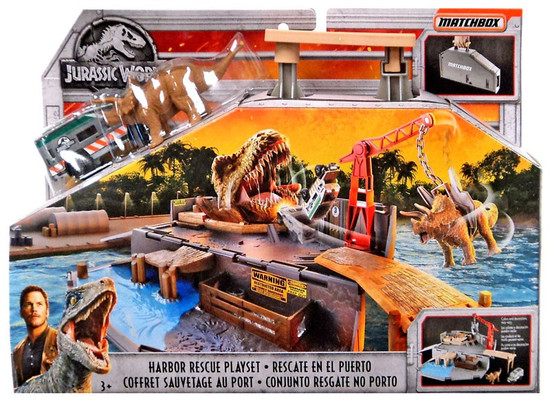 These portable, Matchbox on-the-go play sets are inspired by various scenes from the Jurassic World movies! The two sets in the assortment include the Island Escape Playset and the Harbor Rescue Playset. When the volcano on the island erupts, teams from Jurassic World must get the dinosaurs off the island to safety. The Island Escape set opens to reveal a vertical set with a trail from the top of the volcano, ramps, crane and a molten mass of "lava" that rolls down the trail threatening the mission. Set includes a Pterodactyl dinosaur figure and Jurassic World pickup truck. Both sets fold up with a handle for easy storage. The Harbor Rescue set unfolds and becomes a pier with ramps, a crane, a habitat pen for Triceratops dinosaur figure, and Jurassic World off-road vehicle. Beware the T.rex under the deck. Push button trigger opens the hatch and chomping jaws!
jwmbharborrescue
887961585377
256821
Out of Stock
New