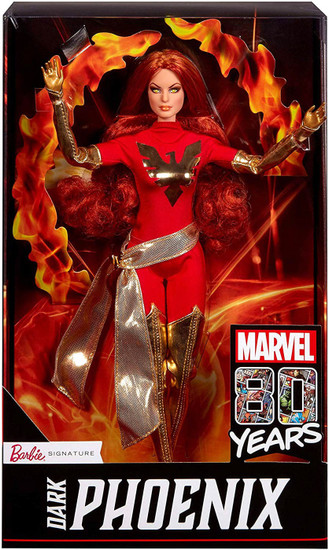 Barbie celebrates the 80th anniversary of Marvel Comics with a tribute to legendary X-Men character Dark Phoenix. Also known as Jean Grey-Summers, Dark Phoenix is an Omega-level mutant with telepathic and telekinetic powers. This beloved character, who has faced numerous deaths and rebirths, wrestles with her personal demons. Dark Phoenix Barbie doll is as fierce as the character she emulates. This collectible Barbie doll captures Dark Phoenix's iconic look in a red bodysuit with shimmering gold details, including the gold phoenix graphic, thigh-high boots, gloves and a sash. Dark Phoenix Barbie doll is sculpted to likeness with vibrant yellow eyes and long, red hair. Celebrate 80 years of action, fandom and Marvel Comics with Dark Phoenix Barbie Doll. Includes Certificate of Authenticity. Colors and decorations may vary.
barbdarkphoenix
887961842180
312448
In Stock
New