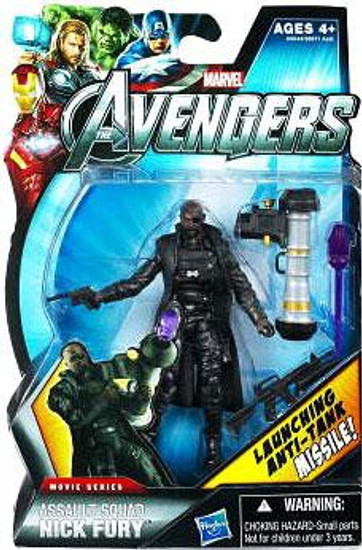 NICK FURY prefers to lead from the shadows, leaving others to take the glory of the triumphs he engineers. But when push comes to shove and the fate of the world is on the line, he is not afraid to step into the line of fire.
Villians beware, because this heroic Assault Squad NICK FURY figure has an appetite for justice and the weapons to make it happen! What chance do evildoers have against this Assault Squad NICK FURY figure? Hes got a rifle for one hand and a pistol for the other, and his missile launcher gives him even bigger firepower! Send him into the fray or stand him up in your collection. Will your NICK FURY figure be able to protect the innocent? Its all up to you!
NICK FURY figure comes with weapon accessories! Includes anti-tank missile launcher!
Figure comes with accessories.
Movie Series 17 Assault Squad NICK FURY
WARNING: CHOKING HAZARD Small parts. Not for children under 3 years. Ages 4 and up.
nickfuryavengers
653569748175
121784
Out of Stock
New