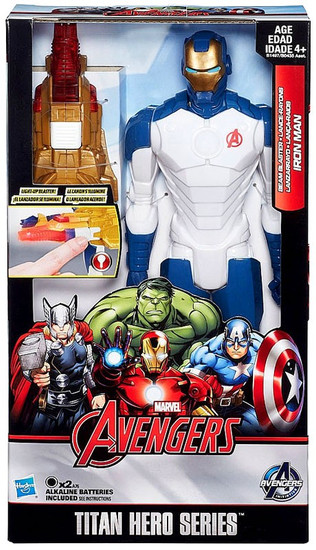 Super-size your Marvel superhero adventures with the electrifying Avengers Titan Heroes Iron Man and Hawkeye Deluxe Electronic Action Figure Set - an Entertainment Earth Exclusive! Each figure is inspired by Marvel's ongoing Avengers story, pitting the world's greatest assembly of superheroes against tougher threats than ever before. Each Avenger is ready to unleash the light of justice on the darker corners of the Marvel universe. These gargantuan plastic action figures are jointed and stand 12-inches tall. Ages 4 and up.

Truly a superior Iron Man, Tony Stark is back in a new blue and white suit of armor! The cool exec with a heart of steel upgrades his wardrobe so he looks snazzy in Silicon Valley or anywhere Stark Enterprises expands! Tony's look is modeled after his classic wardrobe, with a hint of the flavor appearing in Marvel Now! Superior Iron Man's pages. This 12-inch figure comes with a spectacular light-up blaster you'll only find at Entertainment Earth.

Clint Barton went out and found himself some thick red frames, with glass so dark they won't even know his name - but you will! Hawkeye's new outfit is inspired by the massively multiplayer online game Marvel Heroes 2015 and the hit TV series Avengers Assemble, combining to bring you one of the best archers in the business! Loki, Doctor Doom, Ultron, and bad guys won't stand a chance against his funky fine bow with a special kind of light.
ironmanee
630509280704
104838
Out of Stock
New