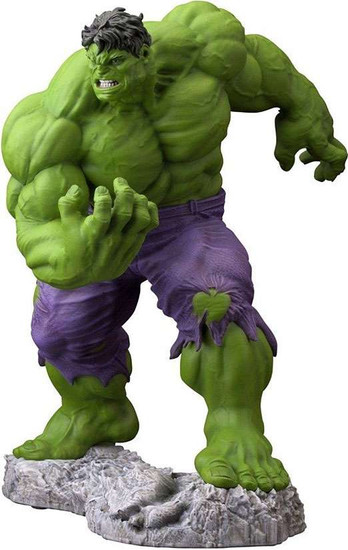 The Hulk has been a staple superhero of the Marvel Comics universe for years, battling foes across the universe in epic storylines. Mild-mannered scientist Dr. Bruce Banner was experimenting with highly volatile gamma radiation when an explosion bathed him with that green energy, transforming him into the enormous aggressive powerhouse known as the Hulk. As the massive creature Banner has been a menace to humanity as well as one of its greatest heroes, and in that respect has served with distinction among Marvels premiere champions. Celebrating his look in those comics comes an incredible brand new Fine Art Statue, Hulk Classic Avengers.
Sculpted by artist Erick Sosa, Hulk stands 12 inches tall on his special terrain display base in the same 1/6 scale as his fellow Avengers. Whether hes standing by himself in your display or alongside the Fine Art Statues of his teammates - Thor, Iron Man, Captain America, and Hawkeye - the mean green machine is sure to impress.
kotobukiyafinearthulk
4934054092437
257141
In Stock
New