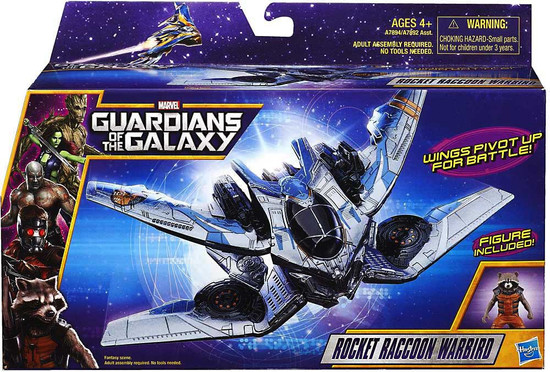 What do a wandering outlaw, a blaster-toting raccoon, a humanoid tree, a green-skinned female assassin, and a vengeance-seeking superhuman warrior have in common? Not much.
Except that the fate of the galaxy rests in their hands and paws and branches. When Peter Quill (he calls himself "Star-Lord") steals a mysterious orb, he becomes the center of a galaxy-wide manhunt. Joined by a group of like-minded (for now) misfits, Rocket Raccoon, Groot, Gamora, and Drax, Star-Lord sets out to save the universe!
Oh, and they call themselves...The Guardians of the Galaxy!
Reconfigure for Battle
4 Wings Worth of Firepower
To Rocket Raccoon, happiness is the heat of his Warbird starfighter's control stick as he zigs and jukes through blistering bursts of plasma fire. When the time comes, the wings of this powerful ship can be pivoted up into battle mode to access an arsenal that puts most stellar dreadnaughts to shame. Space is a nasty place, so it's a good thing Rocket Raccoon can face down whatever it throws his way from the comfort of this fighting machine.
gotgrocketship
653569961918
86122
Out of Stock
New