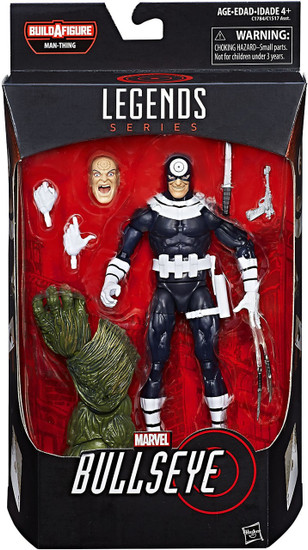 This 6-inch scale Marvel's Bullseye figure features detailed design, extensive articulation, and an attention to detail that collectors and fans alike look for. Inspired by Marvel comics, this Marvel's Bullseye figure includes character-inspired accessories as well as a Build-a-Figure part for the Man-Thing Build-a-Figure. Figure comes in comic-inspired packaging for ultimate display.
Motivated by a personal vendetta against Daredevil, Bullseye becomes an expert assassin, demonstrating an exceptional ability to use nearly any object as a lethal weapon in combat.
Imagine Bullseye sharp-shooting and hitting his mark with the Marvel Knights Legends 6-inch Marvels Bullseye figure. With the Marvel Legends Series, heroes and villains are more than super; theyre legendary.
6-inch scale Marvels Bullseye figure
Detailed design and multiple points of articulation
Comic-inspired design
Includes 5 character-inspired accessories
Collect to build Man-Thing figure.
marvelknightsbullseye
630509526444
162692
Out of Stock
New