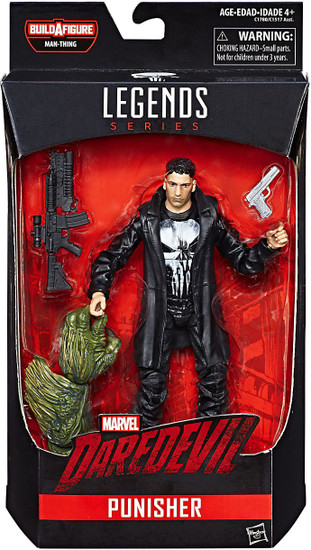 This 6-inch scale Punisher figure features detailed design, extensive articulation, and an attention to detail that collectors and fans alike look for. Inspired by Marvel entertainment, this Punisher figure includes character-inspired accessories as well as a Build-a-Figure part for the Man-Thing Build-a-Figure. Figure comes in comic-inspired packaging for ultimate display.
Frank Castle is on a quest for revenge, waging a merciless war against the criminals of Hells Kitchen.
Imagine Punisher taking down criminals with severe, but effective methods with the Marvel Knights Legends 6-inch Punisher figure. With the Marvel Legends Series, heroes and villains are more than super; theyre legendary.
6-inch scale Punisher figure
Detailed design and multiple points of articulation
Character-inspired accessories
Includes 2 character-inspired accessories
Collect to build Man-Thing figure.
marvelknightspunisher
630509526482
162688
Out of Stock
New