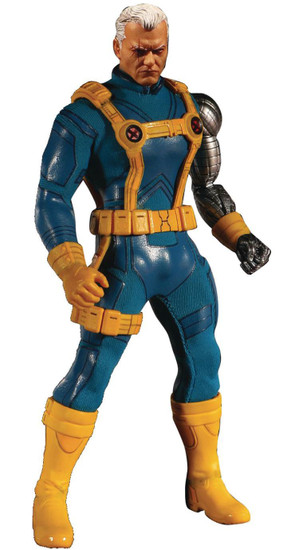 Cable was sent to the future in a bid to save his life when he was infected by a techno-organic virus. Using his formidable telekinetic abilities and cybernetic enhancements, Cable battles super villain foes in his quest for peace. The X-Men Cable One:12 Collective Action Figure features a light-up function that illuminates his plasma cannon and techno-organic eye in both of his head sculpts. The telekinetic mutant features a detailed cybernetic arm and is outfitted in a classic blue X-Men costume made from real cloth, along with flexible utility belt! Cable comes complete with a devastating arsenal of advanced weaponry: a plasma cannon with two removable magazines, grenade launcher with rotating carousel and handgun, spear, and separate handgun! Cable also comes with 4 sets of interchangeable hands and a One:12 collective display base with a stand featuring the X-Men logo!
oct188681
696198768619
280049
In Stock
New