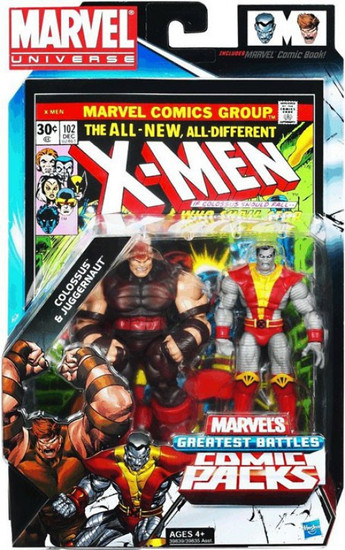 When you weigh almost 2,000 pounds and cant be stopped by any obstacle on Earth, the term fair fight doesnt normally apply...unless your opponent can lift 75 tons and comes encased in impenetrable organic armor. The unstoppable JUGGERNAUT! The unbreakable COLOSSUS! Look out!
Get in on the fast-paced action and excitement as you stage epic battles between your COLOSSUS and JUGGERNAUT action figures! Re-create your favorite scenes from the included MARVEL comic book or create your own super-powered showdowns. With these mighty articulated action figures, theres just no stopping the action!
These heroic COLOSSUS and JUGGERNAUT action figures are carefully detailed and ready for combat! They come with an action-filled MARVEL comic book. Comic book features content from Uncanny X-Men #102.
Pack includes COLOSSUS figure, JUGGERNAUT figure and comic book.
Ages 4 and up.
colossusjuggernaut
653569709022
120915
Out of Stock
New