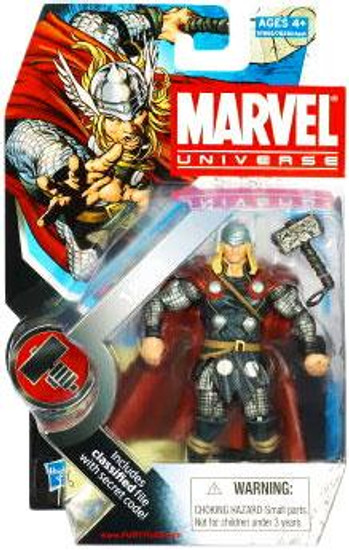 When Thor returned from the darkness of Ragnarok, he found a world far different from the one hed left behind. He therefore resolved to concern himself more with Asgard and its people than with the problems of humanity. Even so, the closeness he felt with the mortals of Earth led him to bring him kingdom to the mortal realm so that his fellow gods might learn what it was like to live among them.

Intricately detailed down to the last muscle, this articulated Thor action figure is ready to fight! Send him into combat with his weapon accessory to battle it out for the fate of the world or leave him posed for action on his stand as a warning against evil-doers everywhere!

WARNING: CHOKING HAZARD Small parts. Not for children under 3 years.

SUMMARY:
Articulated action figure comes with a weapon accessory and a stand for display after youre done enacting all of your fiercest good-versus-evil battles! Figure comes with a classified file with a secret code. WARNING: CHOKING HAZARD Small parts. Not for children under 3 years. Ages 4 and up.
mus7modernthor
653569478195
118248
In Stock
New