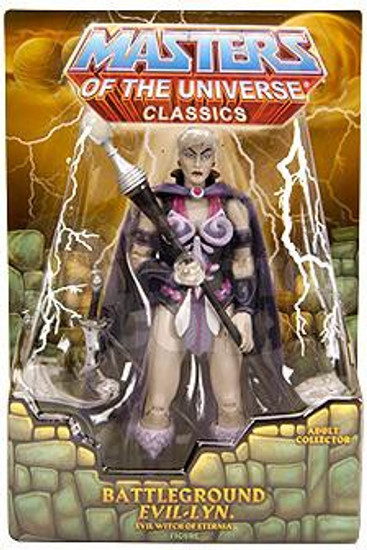 Real Name: Evelyn Morgan Powers
Cast aside by her secret husband after his transformation, Evil-Lyn sent their infant son into the future and plotted to overthrow Skeletor by releasing his enemies from their dimensional prisons. In a series of miscalculations, she helped free the Snake Men, Hordak and Gygor - increasing her adversaries threefold! After Randor and Miro returned from Despondos, the Three Towers rose and Evil-Lyn found herself again allied with Skeletor during the Second Ultimate Battleground. At the end, defeated and stripped of her powers by the new Sorceress of Grayskull, Evil-Lyn used the Cosmic Key and the Power of Central Tower to return to the future to find a new life with her long lost child - The Son of Skeletor!
battleevillyn
027084918687
120868
Out of Stock
New

Masters of the Universe Classics Heads of Eternia Accessory Pack