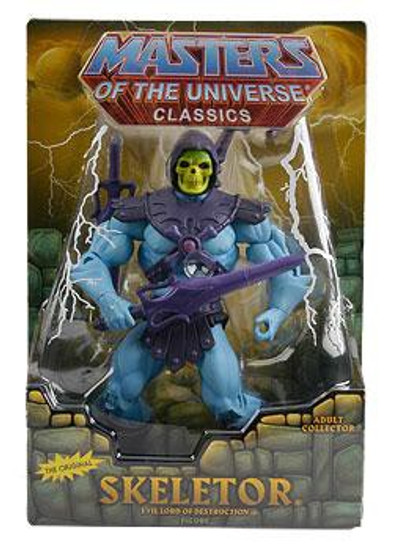 Back in 2008, MOTU fans were ecstatic when the initial Skeletor figure was released. The Evil Lord of Destruction is now re-released with minor changes to bring the design even closer to what the Four Horsemen and Mattel originally imagined. In tribute to the Skeletor from the 1984 line, a burst with "The Original" has been added to the front right corner of the package. The Skeletor figure has the left hand corrected for "tight grip," the face paint is improved, and the bio has been updated to include Demo-Man.

Skeletor is a highly-detailed, fully-articulated action figure, and comes complete with these accessories:

Mortally wounded in battle with his half-brother Captain Randor, Keldor turned to his dark-arts master Hordak to save his life. Merging Keldor with the extra-dimensional being Demo-Man from Despondos, Keldor was forever changed into Skeletor, Overlord of Evil! He gathered together the greatest outcasts and evil warriors of Eternia in his quest to gain entry into Castle Grayskull and obtain what he believes is the universe's ultimate power source.
skeletorexclusive
027084689174
238765
Out of Stock
New