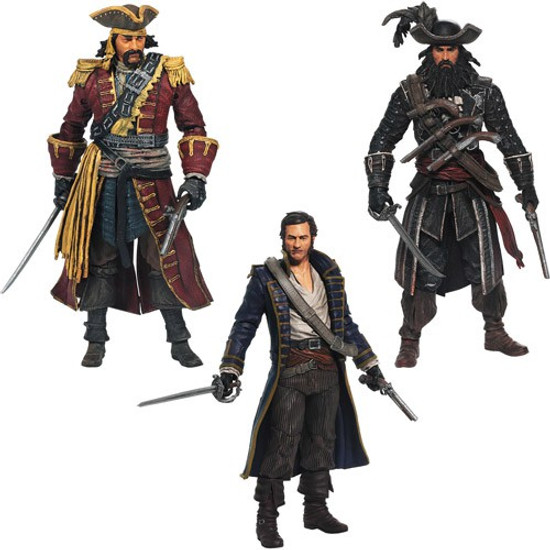 Assassin's Creed IV: Black Flag moves the action and adventure of the Assassin's Creed video game series to an all-new time and setting: the lawless Pirate Republic of the Caribbean. Set during the "Golden Age of Piracy," Assassin's Creed IV features legendary pirates such as Blackbeard. The Assassin's Creed Pirate 3-Pack unites three pirate action figures in one convenient boxed set! Each highly detailed figure will stand approximately 6-inches tall, include an average of 25 points of articulation.
Edward Teach, better known as Blackbeard, is perhaps the most famous of all pirates. This cunning character was a master of presenting a fearsome appearance to shake the resolve of his enemies. At the height of his infamy, Blackbeard was so well-known, so feared, that many of his targets would surrender at the mere sight of him! The figure of the legendary Blackbeard features approximately 27 points of articulation. Figure comes with four pistols, rifle, and sword.
Also included in the Assassin's Creed Series 1 Pirate 3-Pack are two more legendary pirate figures from Assassin's Creed IV: Black Flag. Details to be announced later. Each of the infamous pirate figures features the same game accuracy and attention to detail as Edward Kenway and Blackbeard, and each includes the same level of articulation and range of accessories as our other Assassin's Creed figures.
pirate3pack
787926810141
250807
Out of Stock
New