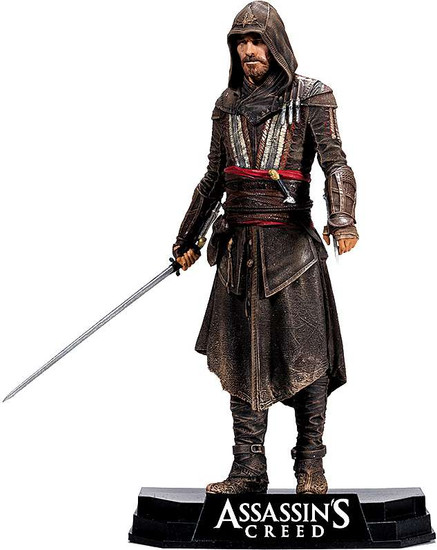 Through a revolutionary technology that unlocks his genetic memories, Callum Lynch (Michael Fassbender) experiences the adventures of his ancestor, Aguilar, in 15th Century Spain. Callum discovers he is descended from a mysterious secret society, the Assassins, and amasses incredible knowledge and skills to take on the oppressive and powerful Templar organization in the present day.
7" Aguilar figure sculpted using 3D scans of actor, Michael Fassbender
Action figure dressed in his iconic Assassin robes, as seen for the Assassin's Creed motion picture reveal
Comes armed with Assassin Sword and extended Hidden Blade, and includes AC branded display base
Collect all of the outstanding action figures in McFarlane Toys Color Tops - Blue Wave.
Aguilar is a warrior in 15th century Spain, during the Inquisition. An Assassin who fights for freedom against powerful forces seeking to eradicate it, Aguilar possesses incredible Parkour fighting abilities. 500 years later, Aguilars memories continue to exist within his descendant Callum Lynch. Once unlocked, Callum experiences these memories in the present day, allowing him to re-live Aguilars thrilling adventures, while acquiring his ancestors powerful skills.
aguilarmoviefigure
787926810714
132637
Out of Stock
New