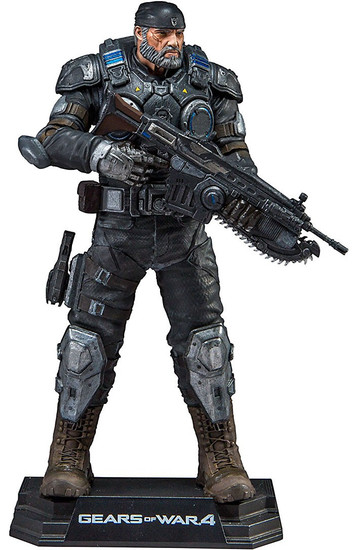 Hero of the Locust War, former Gear, Marcus Fenix finds himself called out of an isolated retirement to aid his estranged son, JD Fenix, to stop the Swarm. Includes Customized Lancer Assault Rifle and Snub Pistol sidearm. Designed with 14+ points of articulation for dynamic posing. 7-inch figure complete with stylized Gears of War 4 branded display baseA new saga begins for one of the most acclaimed video game franchises in history. After narrowly escaping an attack on their village, JD Fenix, and his friends Kait Diaz and Delmont Walker, must rescue the ones they love and discover the source of a monstrous new enemy, the Swarm. Gears of War 4 kicks off a new trilogy for the storied franchise with on-going DLC multiplayer maps and items planned in between game launches.
-"Never Fight Alone: Enjoy two-player co-op with friends locally via split screen or over Xbox Live. Player 2 can select either Kait or Del."
-Horde 3.0: Team up with four others and battle wave after wave of increasingly difficult enemies by choosing your combat class, leveling up your skills and deploying fortifications anywhere on the map
-Brutal New Weapons: An incredible arsenal of new weapons includes the Buzzkill and Dropshot, which can shoot around and over cover, raining destruction from all angles.
-Explosive Versus Multiplayer: Compete online in new and favorite game types, all at 60fps on dedicated servers. A new visible ranking system means fairer matchmaking for social, competitive and professional players alike.
-Redefined Cover Gameplay: New close-cover combat moves and combat-knife executions turn each piece of cover into an offensive opportunity.
mcfarlanemarcusfenix
787926120172
152545
Out of Stock
New