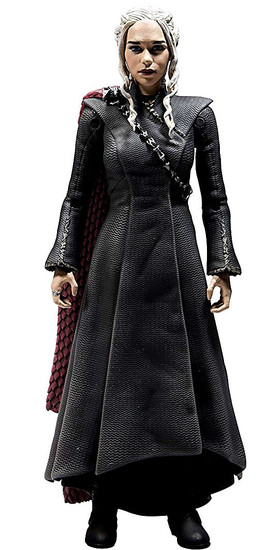 Queen Daenerys Targaryen, is the younger sister of Rhaegar Targaryen and Viserys Targaryen and only daughter of King Aerys II Targaryen and Queen Rhaella Targaryen, who were both ousted from the Iron Throne during Robert Baratheons rebellion. Among the most popular characters on the show, Daenerys is also the Mother of Dragons having rule over Drogon, Viserion, and Rhaegal.
Incredibly detailed figure of Daenerys Targaryen modeled from digital scans of actress Emilia Clark
Articulated Daenerys Targaryen figure featuring iconic attire from season seven of Game of Thrones
Figure features 12+ points of articulation
Figure comes with four screen accurate map marker accessories.
mcfarlanedaenerys
787926106527
273380
In Stock
New