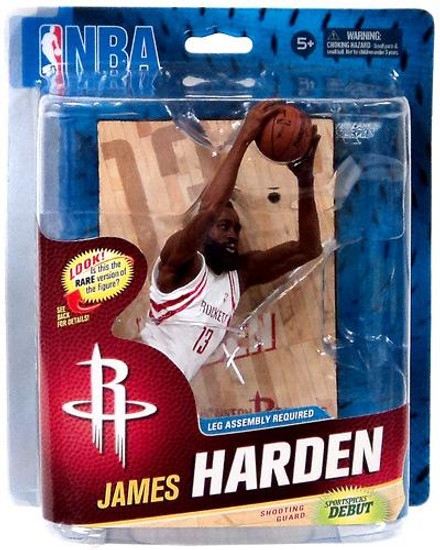 McFarlane Toys NBA Sportspicks 23 supplies a solid mix of new, exciting players, along with some lineup main stays. This six-figure lineup includes new poses for Kobe Bryant, Carmelo Anthony, and the return of Tony Parker (he's back in the lineup for the first time since NBA 12). This lineup also showcases the SportsPicks debuts for the bearded wonder James Harden, Joakim Noah, and the freshly crowned Rookie of the Year, Damian Lillard.
The 2012-2013 season was one in which a new star was born. During his time in Oklahoma City, James Harden was considered to be a potential NBA All-Star. His off season move to Houston proved his fans right, as the Arizona State sharpshooter ranked 4th in the league in scoring and led the upstart Rockets to the playoffs for the first time since 2008-2009 season.
The series marks the return of three of the biggest stars in the NBA over the past decade. Kobe Bryant, Carmelo Anthony, and Tony Parker have combined for 26 total All-Star appearances respectively. All players will be seen in all new poses!
NBA 23 also includes the SportsPicks debut of Joakim Noah and Damian Lillard. Noah, the All-Star center and emotional leader of the Chicago Bulls is known for his tenacious defense and his relentless rebounding abilities. He will be seen wearing his red Bulls jersey. Lillard, the current Rookie of the Year, was drafted #6 overall by the Portland Trail Blazers. The electrifying guard from Weber State averaged 19 PPG, with 6.5 APG and set the rookie record for made three pointers in a season. Lillard was only the 4th unanimous pick for Rookie of The Year in NBA history.
harden23cl
640213871372
81912
In Stock
New