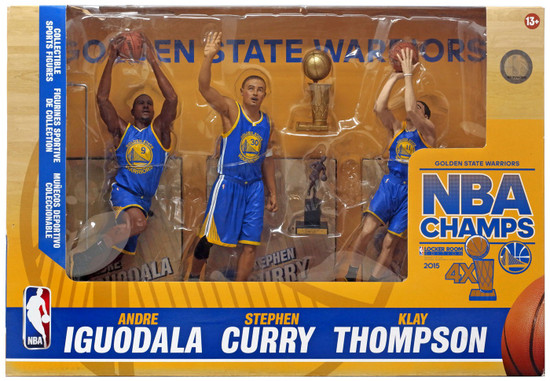 Stephen Curry, Klay Thompson and Andre Iguodala McFarlane Toys action figure 3-pack. It was a golden season for the Golden State Warriors! After finishing the 2014-15 season with a NBA-best record and a franchise record 67 wins and posting the second best home record in NBA history, the Golden State Warriors ended a forty year drought and claimed their fourth NBA Championship.
The Warriors excelled on both ends of the court, using smaller line-ups to dominate their opponents all season long. During the NBA Playoffs, Golden State defeated the New Orleans Pelicans in the first round, the Memphis Grizzlies in the second, and eliminated the Houston Rockets in the Western Conference Finals.
Advancing to the NBA Finals 2015, the Warriors triumphed after a hard fought six game battle with the Cleveland Cavaliers and claimed their first NBA Championship since 1975.
McFarlane Toys celebrates the Golden State Warriors title-winning season with our upcoming NBA Championship 3-Pack. Each highly-detailed figure is depicted in their blue uniform with the official NBA Finals patch and showcased on a basketball sectional base with the Golden State Warriors NBA Championship logo. As an added bonus, each 3-pack will include one scaled replica NBA Championship Trophy and one NBA MVP Trophy (Curry).
STEPHEN CURRY - The All-Star point guard dominated the entire season as one-half of the "Splash Brothers." Curry broke his own record for three-pointers made in a single season (286) and became the fastest player in NBA history to make 1,000 career three-pointers. After earning himself the 2014-15 Kia NBA Most Valuable Player award, Curry took that dominance into the NBA Playoffs, setting a new record for three-pointers made in a single postseason (98).
KLAY THOMPSON - The other-half of the "Splash Brothers," Thompson, with Curry, made a combined 525 three-pointers during the 2014-15 season, the most by a duo in NBA History. The NBA All-Star two-guard also broke the NBA record for points (37) and three-pointers (9) in a single quarter. In the NBA Playoffs, Thompson's contributions on offense helped boost his team to NBA Champions!
ANDRE IGUODALA - After starting for most of his career, the NBA veteran accepted his role as the sixth man. During the NBA Finals, the small forward was added back into the starting lineup to defend against LeBron James. In addition to slowing James down, Iguodala also added the extra offensive fire power needed to catapult the Warriors to victory, earning him NBA Finals 2015 MVP.
warriorschampions3pack
787926766820
107490
Out of Stock
New