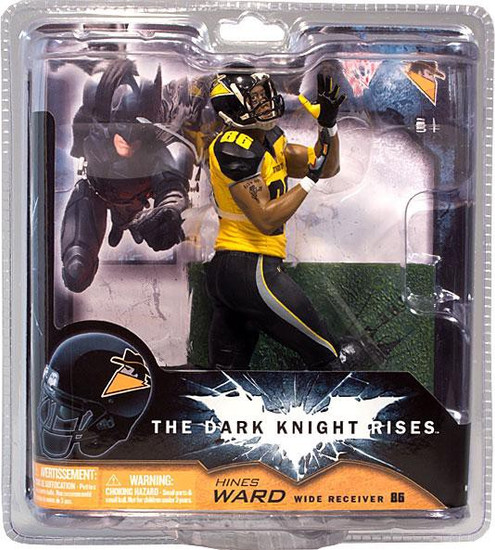 McFarlane Toys is excited to offer piece of the movie in true Sports Picks fashion. During The Dark Knight Rises trailer, fans were able to watch as Bane blew up a football field during a game between the fictional Gotham Rogues and the Rapid City Monuments. Several members of the Pittsburgh Steelers made a cameo appearance during this scene. The main clip shows retired 2-time Super Bowl champion (Steelers) and last seasons Dancing with the Stars champion, Hines Ward returning a kick for the Rogues. The field begins to collapse behind him as he races for the end zone, engulfing both teammates and would-be tacklers. The scene ends with Ward celebrating before finally turning to see the carnage behind him. The Dark Knight Rises' Hines Ward figure is depicted in a black and yellow Gotham Rogue jersey, as seen in the film.
hineswardbatman
787926924954
121690
In Stock
New