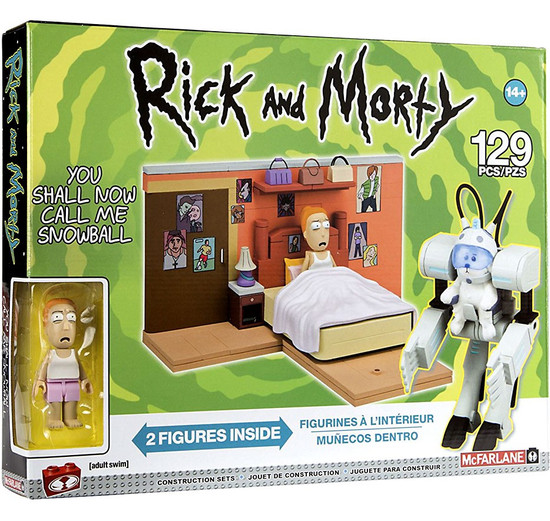 After Jerry complains that the family dog Snuffles is "stupid," Rick creates a device enhancing the dog's intelligence. The device turns Snuffles (who now requests to be called "Snowball") into a super genius dog with the ability to talk. Creating his own robot dog army, Emperor Snowball is poised to rule over humanity, but refuses to do so after realizing his affection for Morty, opting instead to colonize another planet with other intelligent dogs.
PRODUCT FEATURES:
Buildable "You Shall Now Call Me Snowball" medium set inspired by Dan Harmon and Justin Roiland's Rick and Morty television series
Construction set features buildable Robo-Suit Snowball and Summer figures, and Summer's bedroom setting based off iconic scenery "Rick and Morty"
Contains approx. 109 pieces
Figures feature articulation in the main joints and have swappable heads/limbs
Bricks and figures are compatible with other construction brands