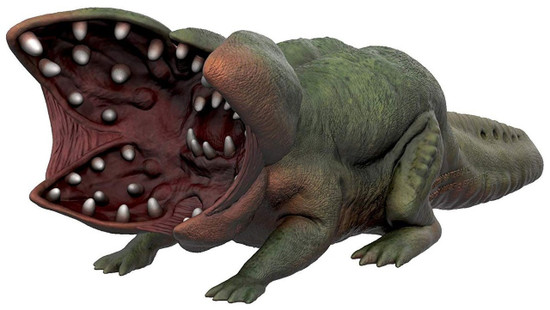 Along with Dustin, audiences fell in love with his fast-growing pet Dart. Now you can purchase the squeezable Dart toy, which shares a uncanny likeness to Dart at the polliwog stage and fits perfectly into the palm of a hand. Features include a lizard-like tail and jaws that open when squeezed.
The most beloved creature in the hit Netflix TV series Stranger Things, D'artanian, or better known as Dart captivated audiences and formed an unbreakable bond with Dustin Henderson that ultimately saved the lives of Eleven and the rest of the gang. Dart was found in Dustin's garbage can as a small polliwog on Halloween night and quickly became the star of the show. Dart was named after D'artanian from the Three Musketeers because of his love for the famous chocolate bar.
Spectacular likeness of Dart
Dart features a lizard like tail and paint that mirrors a slimy monster from the Upside Down
Dart's jaws open when squeezed, showing off its iconic mouth and teeth
Dart has a soft squeezable texture that measure 5-inches long and fits perfect in the palm of the hand
mcfarlanedart
787926900163
260091
In Stock
New