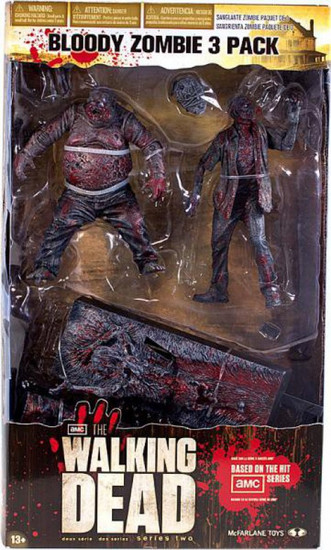 Just like the full-color figure from The Walking Dead TV Series 2, this bloody black & white zombie 3-pack features all of the detail, accessories, and play action of the standard full-color figures. Pack includes Bicycle Girl with damaged cell phone & jeans; Well Zombie with attached rope and canned ham; and RV Zombie with removable screwdriver.
BLOODY B&W BICYCLE GIRL ZOMBIE
The maimed zombie girl shown crawling next to her bicycle in a park turned out to be one of the most iconic zombies from season one. She is also the first zombie Deputy Rick Grimes encountered in the season one opener. Figure features an eerie reaching motion play-action while lying on her base. Accessories include a damaged cell phone and jeans, as seen in webisodes.
BLOODY B&W WELL ZOMBIE
A rotten, bloated zombie surprise resting at the bottom of Hershels water well that the survivors eventually attempt to hoist out by using Glen as bait. This is, by far, one of the sickest looking zombies seen yet on the series, and our figure is one dead on, stomach-churning replica. Figure includes 9 points of articulation with a pull-apart play-action that reveals his soft gooey guts inside. Accessories include attached rope and canned ham.
BLOODY B&W RV ZOMBIE
During the opening scene of season two, a mob of flesh-eating zombies swarm the group. Unaware of the flesh-eating zombie onslaught, Andrea becomes trapped in the recreational vehicle when one climbs aboard. Under attack from this RV Zombie, Andrea fights back, stabbing the zombie in the eyeball with a screwdriver. Our zombie figure simulates that scene with a flip-back head play-action and a removable screwdriver in it's eye.
walkingdeadbw3pack
787926144598
121749
In Stock
New