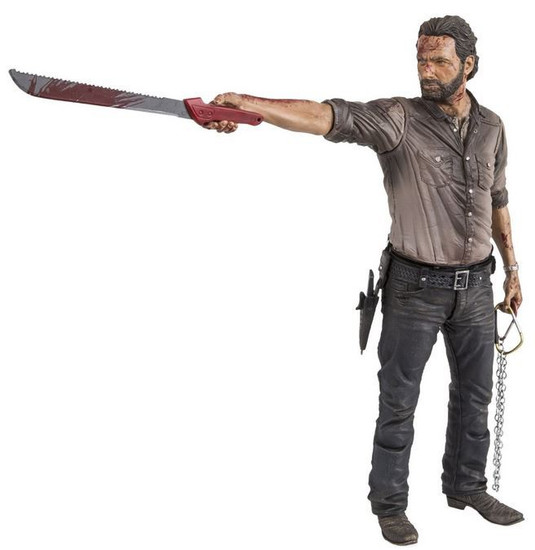 A former sheriff deputy, Rick Grimes leads the group of Atlanta survivors in their desperate search for a safe haven from the constant dangers that now lurk amongst them. As the group looks to rebuild their lives, Rick initially resists his destined leadership role. But as he discovers that there is more than just the undead to worry about, Rick makes the ultimate choice to do whatever it takes to keep his family and friends alive in this less than moral post-apocalyptic world.
McFarlane Toys Rick Grimes Vigilante Edition deluxe figure depicts this transformation from a peace keeping deputy to judge, jury, and executioner. This blood splattered 10-inch figure features the exact likeness of the actor, taken from a full 3D scan of the actor himself, Andrew Lincoln.
Figure comes with authentic in-scale replicas of Ricks machete with red handle, revolver, knife, and d-rings. Also includes an alternate arm and hand to create additional character poses with a various weapon combinations.
Help Rick Grimes take a slice out of crime!
mcfardxrick10
787926144796
126615
In Stock
New