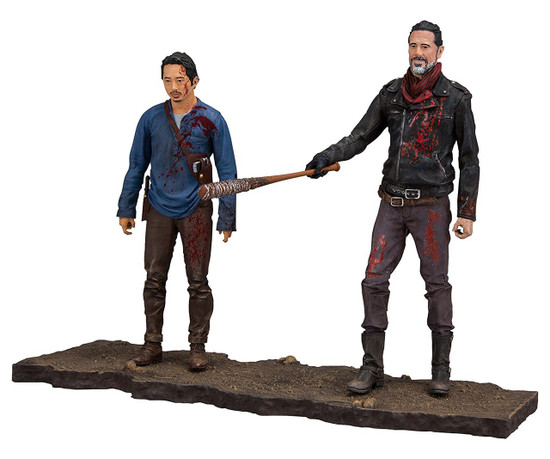 After Daryl lashed out and punched him in the face, Negan mercilessly took "Lucille" and executed Glenn for all to see. Negan's reaction served as a notice to the other survivors that such backlash would not be tolerated and that he would shut it down, reminding the group who was now in charge, leaving them in fear.
Two fully posable 5-inch figures of Negan & Glenn adapted from their iconic scene from Season 7 of AMCs The Walking Dead. Figures reflect spectacular likeness of Negan & Glenn taken from 3D scans of the actors Jeffery Dean Morgan and Steven Yeun. Box Set includes two scaled assault rifles, pistol, watch, knife and Lucille baseball bat. Figures are displayed in AMCs The Walking Dead themed window box packaging.
walkingdeadneganglenn
787926145182
155213
In Stock
New