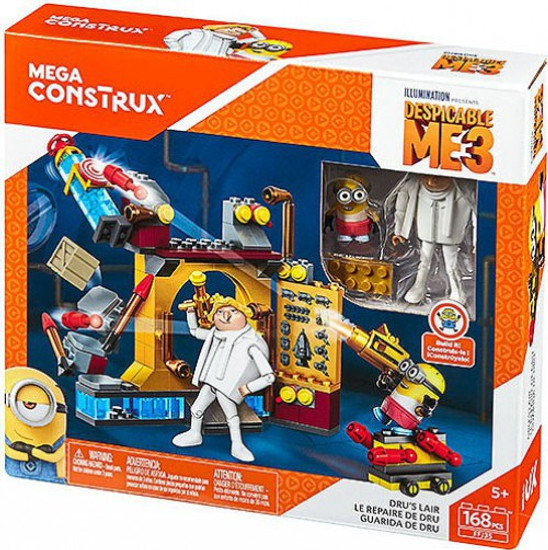 Defeat Dru in his lair with an old-fashioned shootout!
Defeat Dru at his own game by using his gadgets against him! Build the lair and get the jump on Dru by setting a trap above his head, out of sight. Then, when Drus in position, have the Minion fire his missile launcher at the target to drop the canister and knock Dru out! When it comes to making mischief, Dru still has to learn a thing or two.
Inspired by the new Despicable Me 3 movie!
Buildable lair with target-triggered trap
Accessories include buildable, rolling table and missile launcher
Two buildable figures include one Dru and one Minion in tourist outfit
The buildable Minion figure features interchangeable parts, including overalls, goggles, arms and feet
Mix and match Minion clothing and accessories to customize your collectible Minion characters
Compatible brick fit to connect with other construction toy brands
Combine with other Despicable Me 3 construction toys by Mega Construx
Build your Despicable Me world, and Build Beyond!
megadruslair
887961487220
159187
In Stock
New