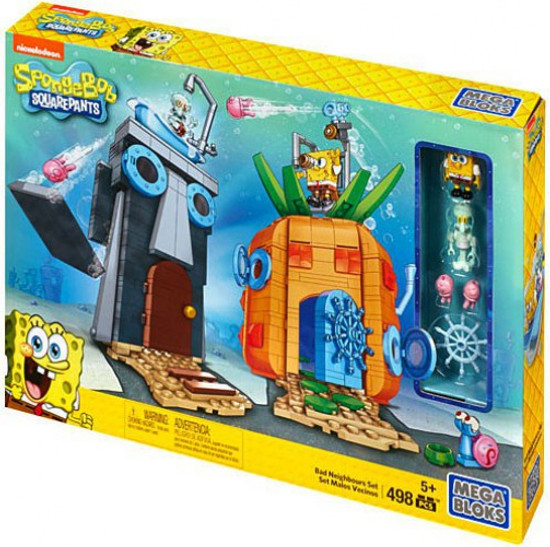 Have tons of fun with this Mega Bloks Spongebob Squarepants Bad Neighbours building set from Mattel Toys. Its just a normal day in Bikini Bottom until SpongeBob misfires while testing out his powerful new jellyfish launcher, accidentally breaking the front of Squidwards house! Squidward doesnt like being interrupted in the shower, but thats just what happens when you build the Bad Neighbors Set by Mega Bloks SpongeBob SquarePants. Put SpongeBob and Squidwards houses right next to each other for all kinds of neighborly nonsense. Move and open up the walls for inside play, or use the working jellyfish launcher for lots of fun messing around! You can collect all the sets to build your own Bikini Bottom world!
Features:
Fully buildable SpongeBob and Squidward houses with action-reaction walls and inside-play
One SpongeBob and one Squidward micro action figures and one buildable Gary
Includes a working jellyfish launcher
Combine with other Mega Bloks SpongeBob SquarePants playsets to build your own wacky world of fun in Bikini Bottom!
badneighbors
065541380387
126695
In Stock
New