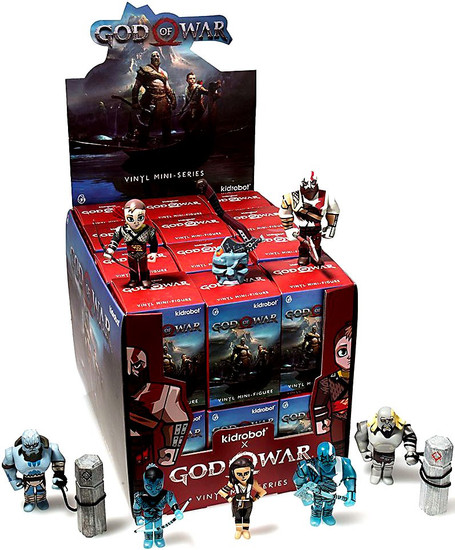 Just in time for the next video game in the critically acclaimed God of War series, Kidrobot presents it's take on characters with the collectible God of War 3-inch Blind Box Mini Series. From Santa Monica Studio comes a new beginning for one of gamings most recognizable icons. Living as a man outside the shadow of the gods, Kratos must adapt to unfamiliar lands, unexpected threats and a second chance at being a father. Together with his son Atreus, the pair will venture into the brutal Norse wilds and fight to fulfill a deeply personal quest.
The Kidrobot design team and the God of War creative team together decided on this harder edged Kidrobot stylization of the game characters would offer juxtaposition to what other toy designers would offer and was more suitable for the inherent strength in the characters as opposed to the softer style.
This collectible mini series features a new take on the characters from the new God of War game. Collect all 8 today and become a true survivor of Norse lore!
kidrgodwarminisbx
883975152673
180135
In Stock
New