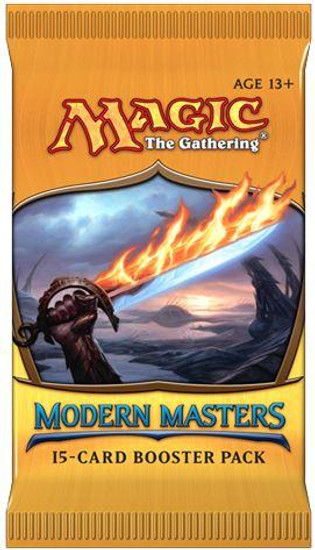 Please note to our International Buyers: We cannot ship sealed Magic: The Gathering products outside of the United States. Sorry for the inconvenience.
$34.99
(You save )

Modern Masters is a large set of reprints from Eighth Edition through Alara Reborn. Modern format tournaments are played around the globe, from Friday Night Magic to the Pro Tour, and players have been clamoring for reprints of popular cards to add to their decks. Modern Masters brings back tournament staples, including the highly sought-after Tarmogoyf. Packs randomly include Token cards, several of which have never been printed before. Modern Masters was designed with a booster draft experience in mind. Display boxes contain 24 packs, the perfect amount for an eight player booster draft.
15 cards per pack, 1 premium foil card in every pack
Reprints of popular cards for the Modern tournament format!
Available worldwide in English only with a conservative print run.
Each booster pack includes a foil card, and many of the cards in the set will feature alternate art.
modernmasterspack
653569832959
77799
In Stock
New