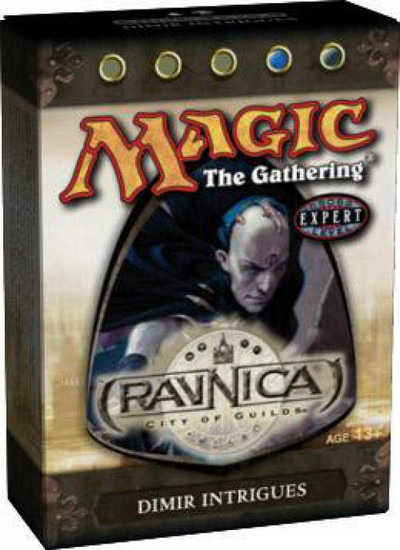 The "Dimir Intrigues" deck will twist your opponent's head around and around . . . and maybe even off! Your opponent starts the game with 60 cards and 20 life. By the time the game ends, one of those two totals will be down to zeroand you don't care which one it is. (Remember: If a player has to draw a card and can't, that player loses the game.) The transmute mechanic lets you find the perfect card for any situation, ensuring that one way or the other, you'll emerge victorious.

While other decks spend their early turns playing creatures, you'll spend your early turns bumping off those creatures. The "Dimir Intrigues" deck has plenty of creature removal, and spells like Last Gasp and Disembowel will help you weather the early storm. Soon you'll start to increase your life total with Ribbons of Night and Psychic Drain, and summoning high-toughness creatures like Vedalken Entrancer and Belltower Sphinx can keep you safe.

Wizened Snitches reveals what's on top of both players' libraries, which is great in this deck. You'll know when to transmute one of your cards to shuffle your own library, and you'll know when you can knock a good card off your opponent's library! Lore Broker and Dimir Guildmage also let you dig deeper into your library to find the best card to foil your opponent's plans.

Once you've gotten used to the deck, you might want to add some other cards from the Ravnica: City of Guilds set.Glimpse the Unthinkable is perfectit takes ten cards off your opponent's library at once! You might want to try more permission spells like Remand or aggressive creatures like Moroii. No matter which strategy you choose, your opponents will be begging for mercy by the time House Dimir finishes with them.
dimirintriguesranivathemedeckmagic
640213895743
117011
In Stock
New