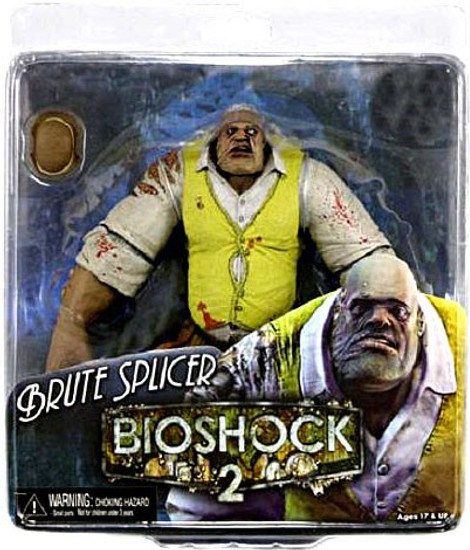 As a skilled boxer, he left London behind to make his way in Rapture. Quick to anger and bigger than most, he found that he rarely fit in with other men. When the city cracked open, he changed with it. The flooded streets tested him man against man and his skills made him a first-rate ruffian - never afraid to hit below the belt. After years of hoarding ADAM he's now capable of inhuman feats of strength - hurling insults one minute, tables the next.
The Brute Splicer was created when Leo Hartwig combined Sports Boost and Armored Shell gene tonics. Seems like a pretty cool idea, except that Leo tested the formula on himself and, whoops, he became the very first Brute Splicer. Now Brute Splicer can be found wandering around Rapture's underwater dystopia, spewing epithets and pummeling players every chance he gets.
A massive figure in both height and girth, the Brute Splicer is just the latest in a long line of top notch NECA goodies for this unique series of Bioshock games.
exclusivebrute
634482449233
213125
Out of Stock
New