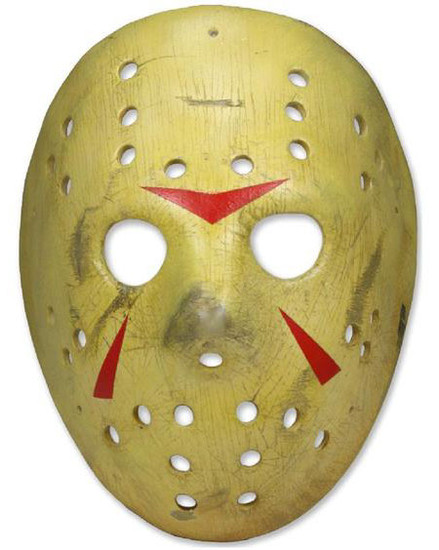 Due to the fragile nature of NECA Collectibles we cannot accept returns on opened product. We inspect each figure before sending it out, but figures can be damaged in transit. Please make sure to inspect your figure for damages BEFORE opening it.
$59.99
(You save )

For the first time ever, an affordable replica is available of the debut hockey mask worn by Jason in Friday the 13th Part 3.
Made from resin and hand painted, includes leather-like straps so you can wear the mask or hang on the wall for display.
At the outset of Part III, Jason is revealed to have limped away from the machete wound delivered by Ginny during the climax of Part II. Initially operating with his head cropped out of each shot, Jason eventually commandeers his new disguise, a hockey mask, from the prank kit array of the obnoxious Shelly. During the battle against Chris in the barn, Jason is dropped from the hayloft and hanged with a resounding crunch, although a moment later he easily lifts himself out of the noose, inadvertently dislodging his mask, enabling Chris to recognize Voorhees as the bestial attacker who had traumatized her on a previous occasion. Chris uses an axe to deliver an apparent death blow to Jason, and is horrified when Jason, the axe jutting from his skull, extends his arms and attempts to grasp her. Then, when it seems certain that the mighty Voorhees is finally dead, the shell-shocked Chris stumbles into a boat and drifts out into Crystal Lake, where she collapses.
fridaythe13thpart3mask
634482150290
109944
In Stock
New