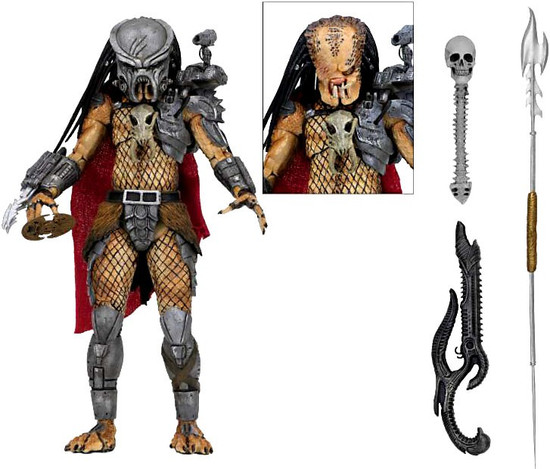 Due to the fragile nature of NECA Collectibles we cannot accept returns on opened product. We inspect each figure before sending it out, but figures can be damaged in transit. Please make sure to inspect your figure for damages BEFORE opening it.
$69.99
(You save )

This brand-new version of Ahab is based on his appearance in the Dark Horse comics. We've given our SDCC 2014 exclusive a massive upgrade, equipping it with the all new "Ultimate" Predator body which has added articulation in the biceps (bicep swivels), elbows (double elbow joints) and torso, plus an opening gauntlet.
The figure also features new loin armor and skirt, new right gauntlet, new knee armor, fabric cape and all new deco. He's equipped with brand new accessories too, including an Engineer Gun, Spear, Gauntlet with both 2- and 3-blade configurations, Engineer skull trophy, alternate hands, and more!
The Engineer Gun can be held or clipped to the figure's back. Stands approximately 8" tall and comes in collector-friendly deluxe window box packaging with opening flap.
ultimateahab
634482515693
162290
In Stock
New