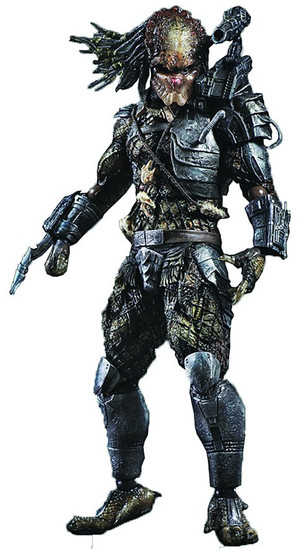 The result of a primitive culture paired with a supreme intellect, the Predator established itself as a new breed of invader from space. Now the original Predator makes its appearance in the PLAY ARTS KAI lineup. Its raw, organic details as well as the realistic metallic sheen of its armor are both captured in this one figure, to bring out the contrasting primal and advanced technological characteristics of the Predator.

Utilization of translucent parts in select areas and the intense paintwork application creates the realistic wet look of a living creature, while inorganic elements like the armor and weapons are tarnished and weathered, just like in the movie.

There are a wide variety of accessories, from an interchangeable face piece and helmet, to a human skull that the Predator has obtained through its hunt. Figure also includes display stand and interchangeable hand parts.
predatorplayartskaifigure
662248815732
99228
Out of Stock
New