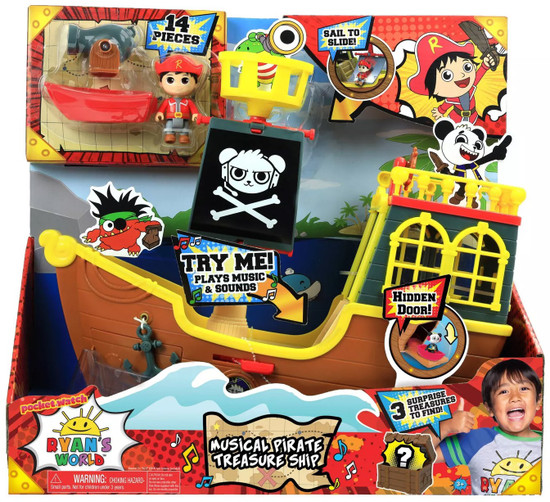 Sail the high seas on the S.S. Ryan! This awesome pirate ship playset is full of fun surprises and includes three figures: Pirate Ryan, Combo Panda, and Alpha Lexa. Kids can look for the three hidden pirate lockers located throughout the ship. What treasures will they find inside? Fun features include a pirate flag that transforms into a slide! Press down on the crows nest to transform the sail and see Gil pop out of the treasure chest. Place Combo Panda at the steering wheel to sail off into new adventures. The wheel really spins! Press the button to play a fun shanty-inspired song. Drop the anchor and pull out the hidden plank. Load the cannon with the Moe cannonball to defend the S.S. Ryan from other pirates. When Ryan needs to make a quick escape, he can use the trap door in the Captains Quarters that leads to a getaway boat in the back of the ship. The Ryans World Pirate Ship includes one awesome playset, one Pirate Ryan fig, one Combo Panda fig, one Alpha Lexa fig, and accessories including: rowboat, anchor, treasure chest, cannon, cannon balls, treasure map, sword, hook, and a pirate locker. Bring home the Ryans World Pirate Ship and the rest of the Ryans World Toys and let your little fan bring their own creativity to life! Requires 2 x AAA batteries (included). Ages 3+
ryanworldmusicalpiratetreasureship
886144799716
350988
Out of Stock
New