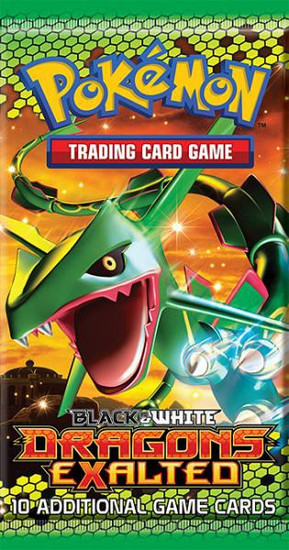 All Booster Packs sold on ToyWiz.com are pulled from fresh factory sealed product. They are completely Clean, Mint and Untampered with ... GUARANTEED!
$79.99
(You save )

Dragon Type Is the First New Pokemon Type Introduced in Over a Decade - Control the might of dragons in a way that can change your game forever when the brand-new Dragon-type Pokemon make their debut in Pokemon TCG: Black & White-Dragons Exalted! The new Dragon-type, the first new Pokemon type introduced to Pokemon TCG in over a decade, features a fierce lineup of more than 15 Dragon-type Pokemon, including Rayquaza-EX, Giratina-EX, Garchomp, and Hydreigon. With a mix of new Pokemon-EX and a powerful group of Dragon-type Pokemon, Trainers will be ready for the roar of dragons and the glory of battle!
Dragon-type Pokemon reflect the unique power of Dragon Pokemon and come equipped with multi-type Energy attacks. Joining Dragon-type Pokemon in the Black & White - Dragons Exalted expansion, which features more than 120 cards, are two versions of six different Pokemon-EX and a host of Pokemon from outside the Unova region like Mew, Ninetales, and Honchkrow. Four new Trainer cards and two Special Energy cards round out this incredibly powerful expansion.
Key features of the new Pokemon TCG: Black & White-Dragons Exalted expansion includes:
Brand-new Dragon-type Pokemon
Two versions of six more Pokemon-EX cards, including full-art Rare Ultra cards
More than 120 cards, including more Pokemon from outside the Unova region
Parallel foil card in each booster pack
Each new Pokemon TCG: Black & White-Dragons Exalted theme deck and booster pack includes an in-pack code card that unlocks virtual cards for play in the Pokemon Trading Card Game Online. Expand your personal deck and battle against others from around the world! Battles are taking place now!
dragonsexaltedpack
820650107658
215318
In Stock
New