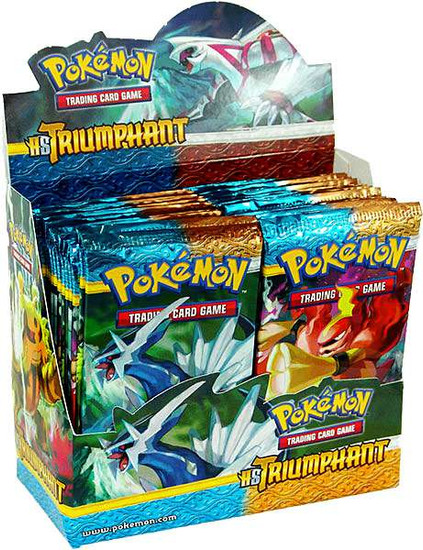 The Goal of Every Battle, the Pride of Every Trainer
Battle for the excitement, for the challenge and for the victory! In the Pokemon Trading Card Game: HS - Triumphant expansion, youll find what you need to put triumph within your reach. Palkia and Dialga combine as an incredible Pokemon LEGEND. Machamp, Gengar, and a half-dozen other powerful Pokemon appear for the first time as Pokemon Prime. New Trainer, Supporter, and Stadium cards - plus a new Special Energy card - give you new strategies and deck ideas. The only thing missing is a Trainer who battles to win and thats you!
The Pokemon TCG: HS - Triumphant expansion features over 100 new cards and remains compatible with previous releases.
* Exciting new Pokemon LEGENDs - Darkrai with Cresselia and Palkia with Dialga!
* Eight Pokemon Prime, including Gengar and Machamp
* Brand new Trainer, Supporter, and Stadium cards with new gameplay strategies!
* Features two theme decks built around Mamoswine (Verdant Frost) and Nidoking (Royal Guard)
* Each theme deck now contains a BONUS booster pack and a deck box for storing the deck
* Holographic parallel set for players and collectors alike
* More than 100 cards in all!
pokemontriumphant
820650115509
118979
In Stock
New