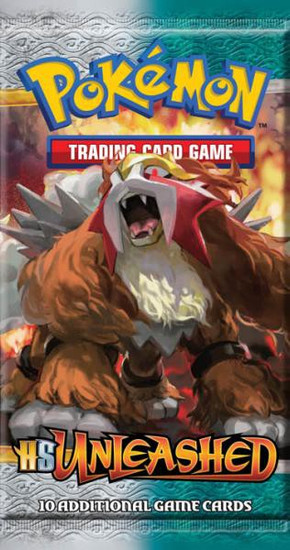 All Booster Packs sold on ToyWiz.com are pulled from fresh factory sealed product. They are completely Clean, Mint and Untampered with ... GUARANTEED!
$169.99
(You save )

The Second Installment from the Pokemon Heart Gold & Soul Silver, set to release early this year and promises to be an amazing Pokemon set as we enter the New Year. We've seen some super cool new releases and changes that have brought players of all ages back into the game!
Pokemon LEGENDs Freed... Pokemon Prime Released... HSUnleashed!Raikou... Entei... Suicune... Alone, each of these Legendary Pokemon is a force to be reckoned with, but let loose in pairs, they become amazing LEGEND cards! In the HS Unleashed expansion, you'll find Pokemon Prime bursting at the seams, powerful Pokemon like Jirachi and Shaymin raring to join the battle, and Pokemon LEGENDs joining forces for twice the excitement! Are you a powerful enough Trainer to command what's been Unleashed?
With new Pokemon Prime, new Trainer cards, and amazing new Pokemon LEGEND cards, the Pokemon TCG: HSUnleashed expansion will give players everything they need to unleash the powers of some of the most powerful Pokemon ever! HS Unleashed features over 90 new cards and remains compatible with previous releases.
pokemonunleashed
820650105302
118525
In Stock
New