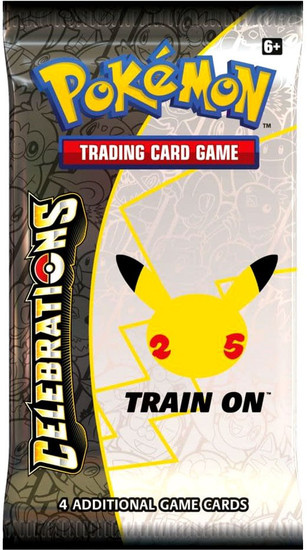 The Pokémon TCG has finally revealed their 25th Anniversary set. Celebrations will be released on October 8th, 2021 as a special expansion featuring some of the most popular Pokémon from the franchise's history. It will bring back many discontinued card types, allowing newer Pokémon to appear in classic styles such as Lv.X, Prime, Light & Dark Pokémon, and more.
Each Celebrations booster pack will contain four uniquely designed cardsall with foil treatments and a 25th anniversary logothat feature characters from all regions of the Pokémon universe, from Pikachu to Zamazenta plus familiar faces like Professor Oak.
pokemoncelebrationspack
795154599479
367131
In Stock
New