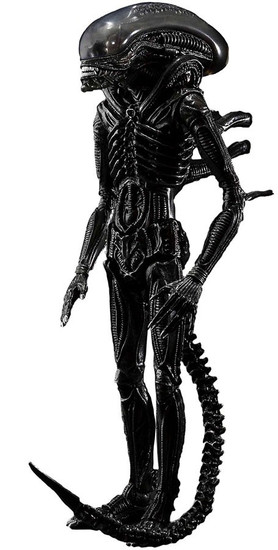 Please note to our International Buyers: We cannot ship Bandai America products outside of the United States & Canada. Sorry for the inconvenince.
$124.99
(You save )

The S.H.MonsterArts Big Chap action figure was developed from the ground up to replicate poses from the Alien film. The overall style dictated by the long arms and legs of the actor inside the suit, and the finely detailed sculpting of the suit itself as designed by Geiger, are replicated in the product in exquisite detail. And it goes without saying that the Big Chaps distinctive translucent head carapace is rendered with a separately-molded semi-translucent part, allowing the precision-sculpted skull beneath to show through (as a side note, a real skull is said to have been used for the movie costume). Posing was designed around the concept of a suit actor portraying the monster on-screen. For this reason, it was designed with a completely different joint system than that of the previously-sold Alien Warrior, which was rendered on-screen with 3D computer graphics. This faithful attention to design allows the figure to feel like a suit being worn by an actor when displayed. In other words, an Alien figure that looks exactly like the Alien on-screen, that can be posed exactly like the Alien on-screen.
shmalien
4543112852557
124056
In Stock
New