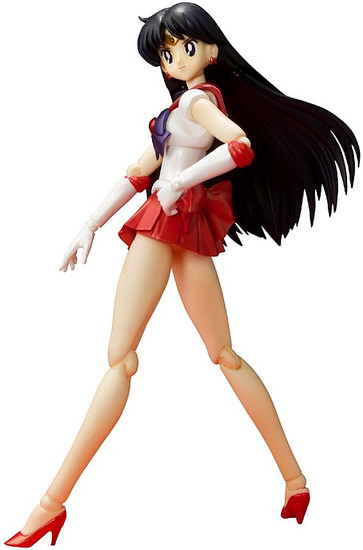 Following the release of Sailor Mercury, the next Sailor Senshi in Tamashii Nations' line-up will be none other than the Solider of Flame and Passion, Sailor Mars! A shrine maiden with a fiery temperament, Sailor Mars finds herself constantly butting heads with the far less adept leader of the Sailor Team, Sailor Moon (the posing options with these two are endless). To fully realize Sailor Mars in the S.H.Figuarts line, a wealth of accessories have been included, allowing her to perform her signature attacks, such as the "Fire Soul" and "Burning Mandala". Mars can also show off her spiritual side, featuring a hand holding the "Akuryo Taisan!" (Evil Spirts Begone!") ofuda scroll. Even her hair has been articulated to allow for a wind blown effect while executing her signature combat maneuvers. A total of four faces are highlighted in the set, including smiling, serious, shouting, and one of intense focus and concentration. Like her predecessors, she also comes with multiple hands for character specific poses, and a special display stand. Don't miss out on this stellar release from Bandai, or (in the name of Mars) you'll chastise yourself later.
shfmars
4543112815040
79945
Out of Stock
New