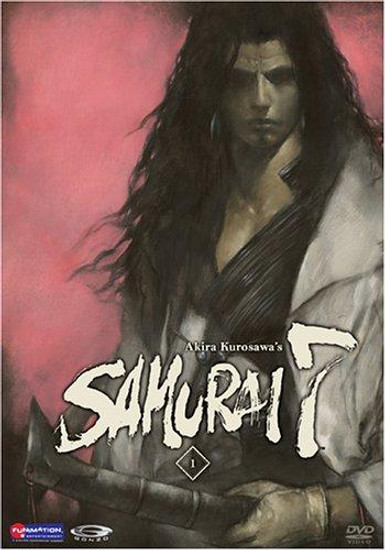 The 2004 broadcast series Samurai 7 borrows the premise of Akira Kurosawa's Seven Samurai (1954): driven to desperation by bandits who steal their crops, the inhabitants of a small village try to hire unemployed samurai to defend them. With nothing to offer as wages but their precious rice, the villagers send a delegation to a nearby town to recruit warriors poor enough to accept the dishonor of working for peasants. Samurai 7 moves the story into the future: the bandits and some of the samurai are robots. The village delegation consists of "water priestess" Kirara, her loud-mouthed little sister Komachi, and diligent Rikichi. In the first four episodes, they find four samurai willing to work for them: grim Kambei, eager Katsushiro, street performer Gorobei, and blustering mecha Kikuchiyo. But Kirara's beauty attracts the effete son of a wealthy merchant, adding a lot of predictable complications.

Seven Samurai is widely recognized as a masterpiece of international cinema; Samurai 7 is a lavish (it cost a reported 32,500,000--nearly $300,000--per episode, an extremely high price by Japanese standards) but derivative sci-fi saga that should have been allowed to stand on its own limited merits. Stressing its ties to Kurosawa's work only invites unflattering comparisons. (Unrated, suitable for ages 12 and older: violence, tobacco use) --Charles Solomon
DVD features
The Limited Edition includes bound volumes of the storyboards for each episode, but in Japanese with no translations. --Charles Solomon
samurai7le
704400058004
119231
In Stock
New

The Man With the Screaming Brain T-Shirt [X-Large]