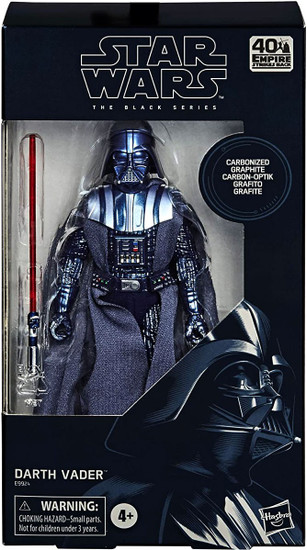 The 6-inch-scale Carbonized Collection Darth Vader figure is carefully detailed to look like the character from Star Wars: The Empire Strikes Back, featuring premium detail, multiple points of articulation, and a metallic finish.

DARTH VADER: Once a heroic Jedi Knight, Darth Vader was seduced by the dark side of the Force, became a Sith Lord, and led the Empires eradication of the Jedi Order
STAR WARS: THE EMPIRE STRIKES BACK: Fans and collectors can imagine scenes from the Star Wars Galaxy with this premium Darth Vader toy, inspired by the Star Wars: The Empire Strikes Back movie
CARBONIZED DESIGN: The Star Wars The Black Series Carbonized Collection is treated with a sleek metallic finish for a premium figure that really stands out in any Star Wars fans collection
PREMIUM ARTICULATION AND DETAILING: Star Wars fans and collectors can display this highly poseable (4 fully articulated limbs) figure, featuring premium deco, in their action figure and vehicle collection.
carbonizedvader
5010993734412
333644
In Stock
New