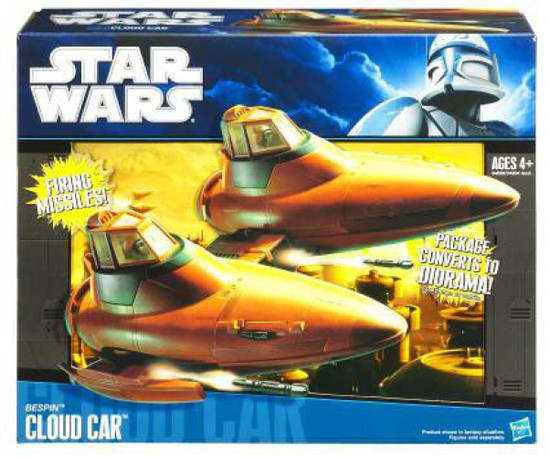 Cloud cars maintain order in the skies of Cloud City above the planet Bespin. These atmospheric vehicles have twin pods and are armed with laser cannons. Using ion and repulsorlift engines, cloud cars can achieve impressive speed as they cruise above the mining colony. When the Millennium Falcon arrives at the floating city to escape Imperial pursuers, two cloud cars immediately flank the ship and keep a close watch on it until permission is granted for the Falcon to land.

Soar into battle with this slick Bespin Cloud Car vehicle! This amazing star-skipping vehicle splits into two separate vehicles making it one very versatile fighter. Meanwhile, the firing missiles and launching hidden and visible missile launchers make this a serious combat machine! Open the cockpit to fit a figure inside (figures sold separately) and check the storage chambers for your additional weapons (sold separately). Retract the landing gear as you being your flightand blast off for adventure!