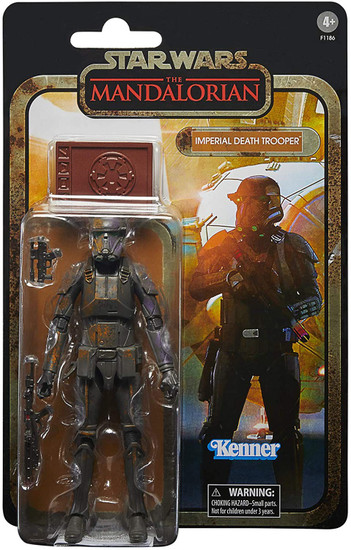 The 6-inch-scale Imperial Death Trooper figure is carefully detailed to look like the character from The Mandalorian, featuring premium detail and multiple points of articulation. Features vintage-designed The Black Series packaging that has been treated with a weathered look, inspired by the stylized images seen during the end credits of the live-action Disney Plus series.
IMPERIAL DEATH TROOPER: The elite soldiers of Imperial Intelligence, Death Troopers are encased in specialized Stormtrooper armor
CREDIT COLLECTION: This distinctive collection features premium deco applications inspired by the end credit images from The Mandalorian, plus a collectible Imperial Credit accessory
THE MANDALORIAN SERIES-INSPIRED DESIGN: Fans and collectors can imagine scenes from the Star Wars Galaxy as seen on Disney Plus with this premium Imperial Death Trooper toy
TV SERIES-BASED CHARACTER-INSPIRED ACCESSORIES: This Star Wars The Black Series action figure comes with 2 Imperial Death Trooper-inspired accessories that make great additions to any Star Wars collection
PREMIUM ARTICULATION AND DETAILING: Star Wars fans and collectors can display this highly poseable, fully articulated figure, featuring premium deco, in their action figure and vehicle collection
creditcollectiontrooper
5010993772995
343317
In Stock
New