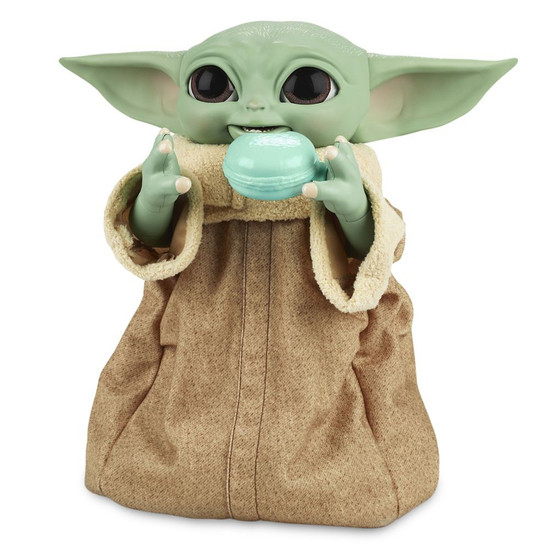 INTERACTIVE ACCESSORIES: The Galactic Snackin Grogu animated toy comes with 4 interactive accessories (bowl with tentacles, cookie, shifter knob, and spoon) that, when placed in his hand, he will react to with animations and sound effects
ANIMATED TOY: The Star Wars Galactic Snackin Grogu animatronic figure stands over 9 inches tall and features motorized movements, including a head, ears, and arms that move, and eyes that open and close
SNACK AND REACT: Pretend to feed Grogu (The Child) with the entertainment-inspired accessories and he will react to them with eating, yummy, or yucky sound effects
HOLD ME PLEASE: Galactic Snackin Grogu will let kids ages 4 and up know when he wants to be picked up and held by reaching up with both arms
2-HANDED FORCE MOVE: Boys and girls can pat the Galactic Snackin Grogu toys head 3 times to activate a 2-handed Force animation, in which he will mimic channeling the Force, inspired by scenes from the Disney+series The Mandalorian
Includes: figure, 4 accessories, and instructions.
Figure scale: 9.25 inches
Ages 4 and up
WARNING: Small parts may be generated.
Not for children under 3 years.
x4 1.5V AA/LR6 ALKALINE BATTERIES REQUIRED. NOT INCLUDED. See instructions.
animatronicchild
358231
Pre-Order
New