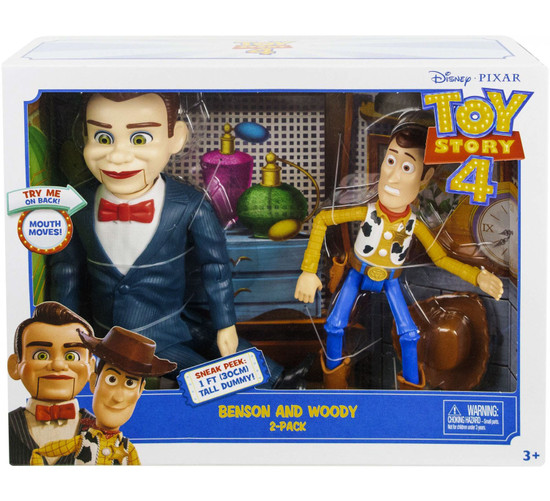 Recreate exciting Disney Pixar Toy Story 4 scenes with Woody and Benson together. In the new movie, the old-fashioned ventriloquist doll is one of Gabby Gabby's faithful companions. The debonair gentleman exudes polished formality in his black suit, bowtie and white shirt, but he never speaks. Recreate the characters' creepy exchanges from the antique shop by manually moving the dummy's mouth! Woody has a concerned expression as he struggles to remain calm. Both figures are exclusive and only available in this two-pack! This unique Toy Story set makes a special birthday gift for fans of all ages.
Disney Pixar Toy Story Benson and Woody 2-Pack Figures:
Age Range: 3 Years and Up
Disney Pixar Toy Story 4 movie character figure two-pack
Woody and the Dummy come in movie-inspired relative scale
The figures are highly posable to recreate their dramatic movie scenes
The Dummy's mouth can be manually moved to emulate speaking
Woody has an exclusive expression and the Dummy is an exclusive figure
ts4bensonwoody
887961780512
295066
In Stock
New