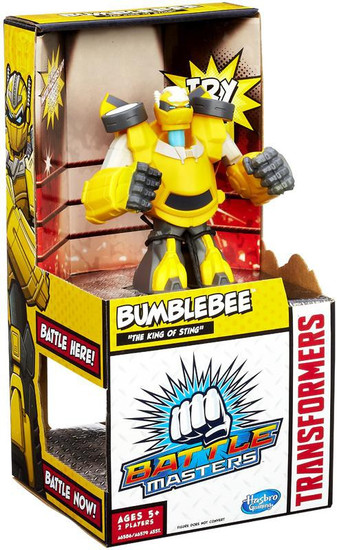 Now you can rule the ring with one of your favorite Autobot Transformers characters. Get ready for some Transformers bot battling action with this head-popping game. Challenge a friend to a battle and see who can strike, punch and dodge their way to a win. Includes a QR code that lets you unlock additional characters in the free Transformers Battle Masters App.
Bring on the powerful "King of Sting"! This Bumblebee battling robot is ready for the ultimate steel-crushing, head-bashing showdown! Get ready to rule the ring like never before, as he shows the Decepticons who is boss once and for all. Choose to play with or without the battle grip controller as you go head to head with your friends to find out who's tough and who's just a sucker! The character comes with a QR code that unlocks the ability to add that character to your arsenal in the free Transformers Battle Masters App.
Includes: 1 Figure, 1 controller and instructions.
Features:
Join friends to bring the fight to the ring.
Features popular Transformers character
Play with or without controller
Includes code to unlock App content from Transformers Battle Masters App.
Bumblebee Figure
Mashing, bashing fun
batmastbumble
653569959311
85619
Out of Stock
New