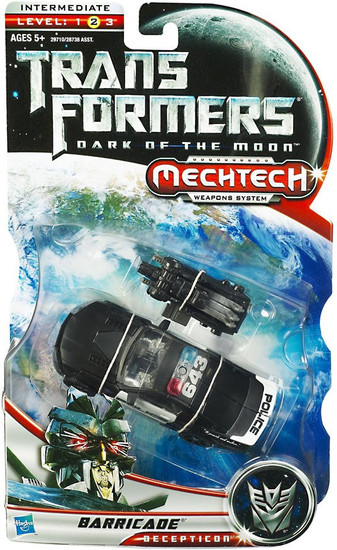 BARRICADE doesnt make friends, he finds potential victims. His seemingly benevolent police car vehicle mode has been known to trick potential targets into trusting him. BARRICADE has the ability to stalk and eliminate nearly any AUTOBOT* he wishes. Humans and AUTOBOTS* alike should take cover when they notice police sirens in the distance it could be the last thing they ever hear!

Fasten your seatbelts for some fast-paced battles with this vehicle-to-robot villain! Switch your stealthy BARRICADE figure from Saleen S281 Police Car mode to battle-ready robot mode. His blaster even converts to a robot wrecking claw for maximum destruction. As the battle rages on, convert him back to vehicle mode so hes ready to chase down enemies!