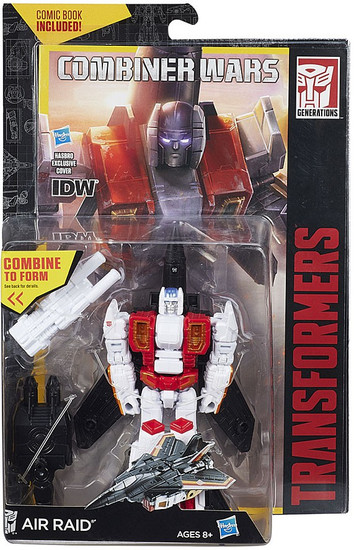 If you need one warrior to fly into a hotbed of enemy activity, Air Raid is the bot to call. He's at his best when he's a one-bot wrecking crew. There's something about improbable odds that pushes his circuits to function at beyond-peak performance. Combine and convert for awesome Transformers action! This Air Raid figure fires his double-barreled blaster in robot mode, and he converts fast to jet mode whenever his high-diving combat tactics are needed. But he can also become an arm or a leg when the battle calls for you to build a truly hardcore Superion warrior! (Other figures sold separately.) Whatever mode your Air Raid figure is in, he's going to bring maximum carnage to the fight! Transformers and all related characters are trademarks of Hasbro.
combinerdeluxeairraid
630509282234
100839
Out of Stock
New